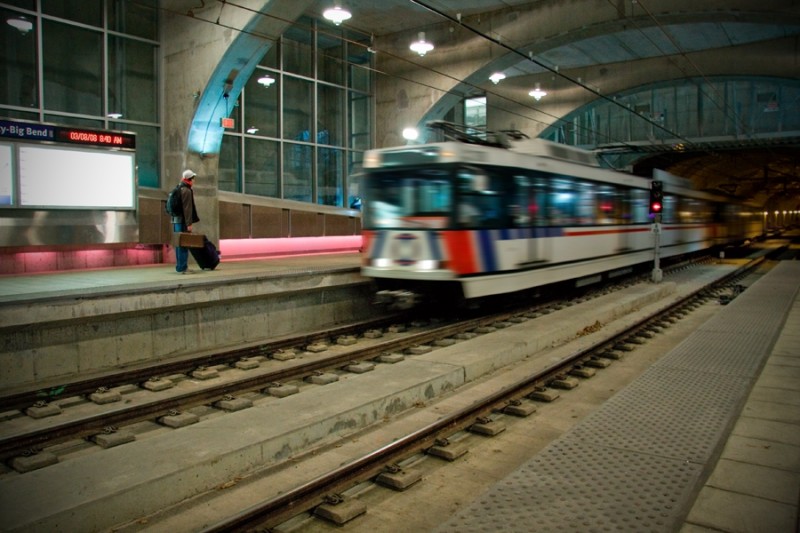 Previous Next
← previous day next day →

After this shot I was politely asked to leave…well, not so politely.

Nice action shot of the MetroLink with great detail on everything stationary around it. So did they run you off citing security reasons or something?

@Bonj: I didn't see any signs posted saying no picture-taking in the subway; saw no security guards at first either. After about five minutes one of the armed security guards (you do see visible video surveillance cameras) walked up to me and said, "No pictures in the subway." To which I replied "I didn't know." "You'll have to leave now," he said. Which I did.

Someone on Aminus3 (I believe it was Disoriented) posted a shot taken in a Washington, D.C., Metro station; he also was told no pictures allowed.

I suppose I'm one of those people who has to learn life's lessons through experience. Lesson learned.

Marion from Nanaimo, BC, Canada

I'm glad you perservered....great shot. Good thing they didn't make you empty your camera. I was at Phantom of the Opera and during the intermission decided to take a picture of the beautiful velvet curtains and chandelier....not such a good idea...almost lost my camera. But back to your picture, love the action of the MetroLink, the colors and the clarity.

Great sense of movement in this shot! I like it.

LOL Way to go Ron, you're my hero...gorgeous take!

The blur of the train is a fantastic contrast with the sharp stillness of the rest of the scene. Great angle and composition too!

By some impossible twist of the fates, I am about to leave for a photo-shoot on the subway system in London this very moment. I’m fairly sure photography is not allowed here either but I’m not a terrorist and refuse to be treated like one. Wish me luck (a food parcel would be nice, too)!

I have some images from the subway and so far have not been told to leave. However, while in living in Crystal City, this past summer near DC,, I was told there were only areas I could photograph. I found out what they were and started pressing my shutter. I like the blurr in this image. Well done!

I like this take very much. Strange that you've been told to leave with the cam. Perhaps it has something to do with increasing the security level against terrorism in the USA. I don't know.... Here in Switzerland it's in general no problem to take photos in Subs, Metros or things like that.
Have a nice Sunday - Wys

Will from Gainesville, United States

great shot...and capture of the moment....i was told to put my camera away at airports..it's crazy:)

Great shot, love the motion blur on the train

Nice Ron. I was taking photos outside a palace in Thailand, and I guess there was an invisible line after which pictures were not allowed. A guard actually walked with me step by step and with head nods and shakes guided me to the point where I could shoot, and after that point I had to put my camera away. It was a little surreal, sometimes the rules are so strange! Shame too, that was a nice building...

I like this picture, which has the feeling of morning, of the start of a day. The combination of the moving subway and the stationary figure is very effective. Glad you didn't get into too much trouble, and also glad that you got this shot before you had to leave.

People who want to photograph for nefarious reasons can always do it. People with honest hearts who shoot in the open are run off. Would they stop you if you had a sketch pad?

I took a photo today at a Metro Station in DC (they were doing some maintenace work inside the tunnel)... a worker came and told me I could not do it. Same thing happened a month ago in Union Station : (

Nice shot. But the "you can't take photos" stuff is bullshit. There is NO LAW in this country that prohibits you from taking photos on public property. When they pulled this crap in the NY Subway enough people challenged the law that they had to back off. However, that doesn't mean that uniformed cops or especially, security guards, won't still tell people that they can't take photos. Of course, they can and will take your photo equipment and arrest you in spite of the fact that you are within the law. Ultimately you would no doubt get your damaged equipment back and win in court, but I suspect that like me, you neither want, or can afford the hassle. That's why they get away with this fascist BS --complete imbalance of power. However, you might lodge a complaint with the transit authority after the fact.

You might be able to tell from my response that this no photography stuff really pisses me off. That's because when I was a kid these kinds of photo prohibitions were one of hallmarks of the totalitarian States like the USSR that we used to ridicule for their lack of "freedom." These prohibitions have no legitimate purpose whatsoever. No "terrorist" has ever been caught taking photos. As one of the posters above indicated, anyone who really wanted photos for nefarious purposes --not that they'd be necessary anyway-- could easily take them undetected. It's sad and enraging to watch as ignorance and political exploitation moves my country in the direction of such "great" countries North Korea, and the old USSR, where taking photos in public places is "prohibited."

great shot! i like how you captured the light and love how strongly you contrasted the motion of the train and the stillness of the man.

Ron, I found an interesting article you might read - I'm printing one off to keep in my photo bag! http://www.krages.com/phoright.htm